Toyota is working on a mini monster truck.

Tacozilla will debut at SEMA. (Toyota)

The automaker’s motorsports tech center in Texas is building an updated version of the pickup-based camper it collaborated with the Chinook RV company on in the 1970s that will be unveiled at the SEMA auto show in Las Vegas this November.

A rendering of the Tacoma-based vehicle depicts the modern styling that the team is going for, which director of operations Marty Schwerter said will provide the kind of clearance needed for off-roading.

The team has nicknamed the creation «Tacozilla» and it includes a compartment large enough for a six-foot two-inch person to stand in, a bed over the cab, a table, a kitchenette and a toilet.

It’s being built on a Tacoma TRD Sport chassis with a manual transmission and the sketches depict it with a set of oversize all-terrain tires and heavy duty suspension.

How to protect your kids from dangers of social media, according to a Gen-Zer

Facebook whistleblower Frances Haugen reiterated how the effects of social media are harmful to kids during last week’s hearing on Capitol Hill, raising concern among parents.

NYU junior Rikki Schlott joined «Fox & Friends Weekend» following her recent Fox News op-ed to discuss what parents should remain aware of when it comes to allowing their children access to social platforms.

«The scheme of human history has been completely changed by social media and these new platforms that have re-written what it’s like to be an adolescent and to want to fit in and connect,» she said.

Schlott advised parents to understand the generational disconnect surrounding technology and suggested that setting screen-time limits and engaging kids in being mindful about usage are better options than completely swearing off social media.

PARENTS SLAM FACEBOOK FOR TARGETING CHILDREN: ‘I DON’T TRUST ANYTHING ON SOCIAL MEDIA’

«Not just being a tyrant and saying we don’t have social media in this household or we wait until a certain age,» she said. «But really talking to your children and engaging them in that process and making sure that we’re fortifying them with the skillset to ultimately self-regulate and to ultimately be mindful people in the digital age because these technologies are not going anywhere anytime soon.» 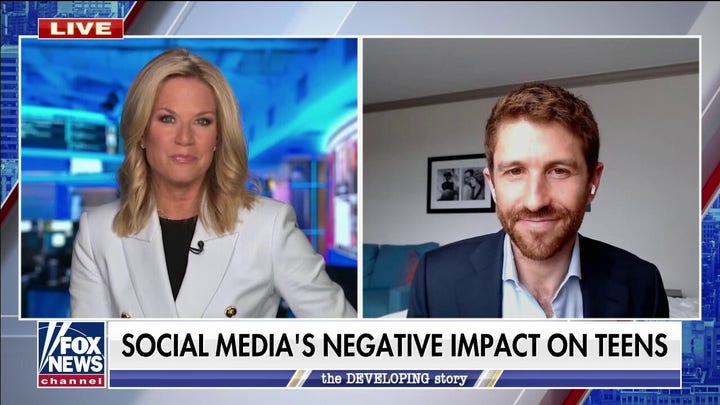 The Gen-Zer shared a tip to consider using a feature on iPhone devices that allows parents to set time limits on certain apps, even though limits will differ for every kid. Schlott repeated that having a conversation about your child’s needs within a technological capacity is most important.

«As I look back now as a 21-year-old, there are many books and maybe a few languages I could’ve mastered in the time in the time that I spent just scrolling on my iPhone,» she said.

In her own experience, and of those in her generation, Schlott mentioned that photo-sharing app Instagram has had the largest negative impact on teen girls, as Facebook data reveals one in three have suffered a worsening in body image issues because of it.

«Ultimately, what we’re seeing is a bombardment of a highlight reel of everyone else’s life,» she said. «Every woman who’s ever been a teen girl knows the desperation to look beautiful and to fit in. And beauty standards have gone from unrealistic to entirely unreal.»

Seeing Facebook ads for something you’ve talked about? Be very worried.

DO you keep seeing Facebook ads for products you’ve talked about in real life – but haven’t searched for?

It’s probably made you paranoid that Facebook is listening to you. Well, you should be worried.
The fact is that there’s absolutely no evidence at all that Facebook is spying on your real-world conversations.

In fact, Facebook is able to show you these eerie ads because it has a shockingly detailed picture of your life.

The worrying fact is that much of this is from information that you yourself hand over.

And some of it is from following you around the web, monitoring what you do.

Facebook simply doesn’t need to spy on you – your own behaviours provide plenty of data.

Accessing a smartphone microphone without your permission would be a huge invasion of privacy.
But time and time again, we see claims of Facebook snooping on your private conversations.

Usually it’s linked to seeing an ad on Facebook for a product that you’ve not searched for – but that you’ve spoken about in real life.

The good news is that this is very easy to explain as pure coincidence, or by remembering that Facebook knows so much about you without having to listen to your private chats.

So is Facebook actually listening to you?
Well the real answer is probably scarier – we (accidentally and purposefully) give Facebook so much info, it doesn’t need to «listen in».

But there has never been any solid evidence – beyond hearsay and anecdotes – that the social media giant is recording your chats.

Facebook has repeatedly denied the claims, highlighting that it bases the ads you see on your interests and information from your profile.

A number of independent investigations have found no evidence that the US tech titan secretly listens to its users.

Experts say that, while Facebook hoards plenty of data, it’s extremely unlikely that the company secretly records hundreds of millions of people.

The key point is that Facebook doesn’t have to.

It knows enough about you from your browsing data and profile information to target you with very specific ads.

Facebook has repeatedly and strongly denied that it uses microphone recordings to target ads.

«Facebook does not use your phone’s microphone to inform ads or to change what you see in News Feed,» a company spokesperson said.

«Some recent articles have suggested that we must be listening to people’s conversations in order to show them relevant ads. This is not true.

«We show ads based on people’s interests and other profile information – not what you’re talking out loud about.

«We only access your microphone if you have given our app permission and if you are actively using a specific feature that requires audio.

«This might include recording a video or using an optional feature we introduced two years ago to include music or other audio in your status updates.»

Why does it feel like Facebook is snooping on you?
The magic of targeted advertising is that it should feel relevant to you – even if you can’t figure out why.

Facebook doesn’t need to spy on your real-life conversations, because you hand over so much information anyway.

Follow this link and you’ll be able to download everything Facebook knows about you. Most of you will quickly realise it’s a staggering amount of information.

Advertisers can use information gleaned from your activity all across the web, on multiple devices, even if you’re not logged into Facebook or other services.

They’ll likely know where you live, what you like, who your friends are, how much money you make, your political beliefs and much more.

So when you get ads for something you’ve talked about out loud, it’s almost certainly just advertisers being very good at predicting your interests.

It’s also possible that there’s an advertising campaign running, and you’ve seen an ad and not noticed. You’ve then spoken about it, never realising you’ve been advertised to, and only then notice future ads – which suddenly seem suspicious.

Let’s say you talked about a holiday to Scotland, and then all of a sudden you’re being advertised holidays to Scotland.

You may never have searched for anything to do with that before.

But Facebook could use info about your level of wealth, your past holiday interests, the time of year (ads for wintry Scottish retreats are common in the colder months), and your location.

What seems like snooping is actually just clever advertising.

Just a coincidence
But also, it’s important to appreciate that noticing an ad for a product you’ve spoken about is almost certainly a coincidence.

If you’re a regular internet user, you’ll probably see hundreds of ads in a given day.

That’s thousands a week – the overwhelming majority of which you’ll never even notice.

But maybe once or twice over a few months, you’ll notice an ad for a product that you’ve spoken about – but not searched.

The chances of this happening once in a barrage of thousands (or even tens of thousands of ads) is probably very high.

You won’t think about all of the ads that didn’t pique your curiosity – just the one that made you feel paranoid.

So take comfort in the fact that often, ads are very wrong.

And if you’re really paranoid, your iPhone has a handy trick that can prove your phone isn’t listening to you.

How to check for Facebook spying
First, make sure your iPhone is updated to iOS 14 or later in Settings > General > Software Update.

This update adds a «warning dot» that alerts you whenever your microphone or camera is activated.

That means if any app is surreptitiously recording you, you’ll know about it.

An orange dot will appear in the upper right corner of the screen when the microphone – or camera – is activated.

If the dot is green, your camera is being used.

By swiping into your Control Centre, you’ll be able to see details about which app is using the microphone.

If you suspect something is up, you should check the app’s permissions in Settings.

You can deny specific apps access to your microphone or camera, for instance.

And if you’re really worried, you could just delete the app altogether.